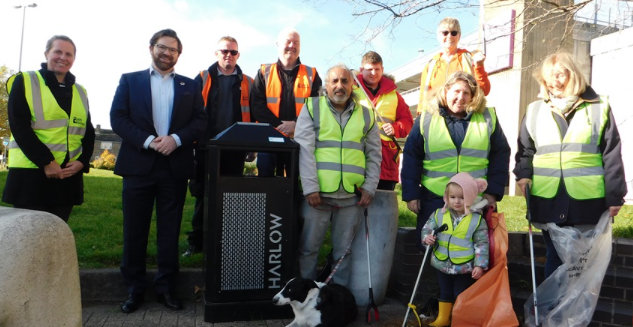 New labels with a scannable QR code and unique numbers have so far been put on 187 litter and dog waste bins around the town.

By scanning the code with a smartphone residents are taken straight to Harlow Council’s website where they can make a report if bins are full or damaged.

Residents can use their camera or a QR code scanner app on their phone. Even without a smartphone the number on the label makes it easier for residents to tell the council and HTS exactly which bin needs attention.

The idea for the bin stickers was first suggested by local community litter picking group the Harlow Wombles. The Wombles have around 300 members of all ages who help keep the town clean.

The new scheme was officially launched this week by HTS, members of the Wombles and Councillor Alastair Gunn.

Stella Dunlop, HTS operations manager for environment services, said: “By using this technology we are now able to quickly locate the reported bins and deal with them efficiently to help us keep the town tidy. HTS are looking forward to continue working closely with the Wombles and the council on projects like this to help improve the cleanliness of the town.”

Councillor Alastair Gunn, portfolio holder for environment, said: “I’m pleased that using the Wombles’ simple and effective idea, we are making it easier for them and all Harlow residents to report litter bin issues directly to us for attention. Getting full or broken bin reported and sorted quicker means that less litter will be dropped.

“By working together residents, the council, HTS and the Harlow Wombles volunteers can make Harlow cleaner and tidy, restoring pride in our town.”

Zulqar Cheema from the Harlow Wombles, said: “We very much welcome the council and HTS rolling out these stickers on litter bins. As a community group of residents who pick up litter on a daily basis we know what the impact on the environment can be if a bin is broken or full. It is up to every one of us to do our bit to help keep Harlow clean and litter free. These stickers and the use of modern technology will really help improve the way that street cleaning issues are reported and the speed in which they are dealt with.”

Residents can report street cleaning issues for attention at https://www.harlow.gov.uk/safety-and-crime/report-street-problem or by calling Contact Harlow on 01279 446655

With thanks to www.yourharlow.com for this story.